Developed by bikers for bikers, the Sena Smh10 is one of the last arrived in the market of Bluetooth intercom for two wheelers. We tested the Sena Smh10 Dual which includes two sets of Smh10.

For the story, Sena is active in the industrial Bluetooth world for years now and the Smh10 has been developped and conceived in Europe. In fact, in 2006, managers of Sena Europe, bikers for pleasure, sa down for a while and thought about an intercom which could answer the specific needs of bikers. The result is there with the Smh10.

Sena Smh10 Dual is packed in a black box and the cover reminds, on its back, the main specifications of the product.

At the opening of the set, a good smell of electronics comes. It literally smells good quality. This impression is confirmed by the disposal of all the elements on the first level of the set.

The first one includes electronics parts. All the wiring for sound of the helmet is located in proper places. We have to point out that the speakers are real speakers not micro-pastille.

Oh the second level, we have all the connectivity. As the set is « Dual », all elements are here in double. From home charger to car charger, cables, audio connection cables, complementary kits, Sena provides all for each one to put on the Smh10 in any case and in any helmet.

When we were telling you that the Smh10 is made by bikers for bikers.

Sena Smh10 is thought so that any handling manipulations are obvious and easy.

As for most intercom, we have to introduce a clip in the helmet between the inside and the outside of the helmet. The complementary kit is self adhesive but Sena, as all the other manufacturers, advises that this way of installation presents some risks. Sena provides the small allen tool to fix the support to the helmet.

Once the microphone headset installed, the only thing left to do is to put high speakers in the helmet and place them in front of the ears. Hopefully, the hight speakers have a grippy side which make them stick to the foam. If the position has none, a simple double-face will be ok.

The electronics part of the Smh10 comes on the support and no need to take off the helmet. A « clic » confirms the electronics is on the right position.

Built by bikers for bikers, we said.

The electronics element has only two buttons. A big jog dial and a small button on the rear, that is all. This element concentrates what is the best in terms of electronics et ergonomics.

We were a little worried about what we had to do with these only two buttons but finally, Sena Smh10 is totally controllable and so easily.

The jog dial is the master piece of the electronics part and the usage depends on the mode you are. It is big enough for handling with gloves and precision. On the leaflet, there is up to eight different functions allowing full management of the Smh10 from this jog dial.

The rear button mainly is for phone answering. We say mainly because it is also used for specific actions such as pairing with a Smartphone.

In ordinary usage, the jog dial is here to increase-decrease volume of the high speakers. As the rotation is made long, you will have the possibility to adjust the volume as you want. A « beep » sounds to warn you minimum and maximum are reached.

To turn on and off, the Smh10, a little pressure on the two buttons and the Smh10 sounds increasing and decreasing beeps. So easy to do, even with gloves.

Sena Smh10 uses the V2.1. bluetooth allowing class1 for the intercom. The BT allows a connection earphones, free hands and AD2P and AVRCP.

Pairing with another BT apparels is so easy. A long press on the phone button, 5s, and the Smh10 flashes red sounding fast beep. After switching on the BT of the other apparel, the Smh10 is detected and recognised by most of the apparels, smartphone or whatever. Once paired, you only have to put on the BT and the connection starts without any other thing to do.

The BT of Sena allows several connections at the same time. We tested a connection between a Smartphone-Gps and another Smh10.

If ever it is a phone call, it has priority among all.

The audio part of the Sena Smh10 is connectable through cable or bluetooth. By cable, nothing easier. You only have to plug the earphone output of your apparel to the input of the Smh10. Nothing to add, except that the cable is a little too short. You will have to put the external source in the upper pocket of your jacket.

About the amplification, the Sena Smh10 is for the moment the only one intercom which allows a clear and distinct sound from an external source, over 160km/h on circuit. The high level of sound and the jog dial are one of the best points of the Sena Smh10. Under an open face helmet, it is so welcome to cover aerodynamics noises. The amplification is so important that after a run on « circuit », you have to decrease the sound.

In town and on roads, the stereo bluetooth is wonderful. Listenning Mp3 without saturation, with a minimum basses changes one’s life. The sound is simply tremendous for the quality for a bike intercom. Real high speakers are appreciated. Perhaps, Sena managers were also music lovers.

With the jog dial, you can pause, previous, net track. It is almost happiness.

We were expecting the Sena Smh10 on this point and we had a good surprise. Two modes of intercom are available.

The first one is automatic and is the original one. Pilot and passenger have to produce a word or any sound louder. The Smh10 detects intercom has to be switched on. You can then discuss. After a 20s period without a word pronounced, the Smh10 automatically switches off.

The other mode is manual. After activating this mode according to the leaflet procedure, to start or to finish a conversation, you have to press shortly the jog-dial. if you don’t press to end a conversation, the Smh10 will switch off automatically.

This is the mode we choose for rides. in fact, as it is possible to listen to mp3, one of the connected who also sang under his helmet, always put the intercom on. If at least, he was singing in the tone...

The pilot-pilot intercom is fantastic. To talk bike to bike is a real pleasure. Discussing or share with the bike on head is a security element for sure. In wide countryside, the intercom distance is about 1 kilometre. In town, depending on the landscape, straight line or small street, the distance changes from 800m to 400m.

Smh10 has the good idea to warn you when the connexion is about to cut off. In usual time, the sound is clear and has a good quality. and in the meantime the distance increases, crackings and scratchings can be heard and cuts chops conversation.

In case of waste of connexion, the leaflet describes exactly what happens. Two short beeps are sounded. That means Smh10 is searching for connexion. And as soon as the second Smh10 is in range, the connexion is automatically activated. good job from Sena engineers. 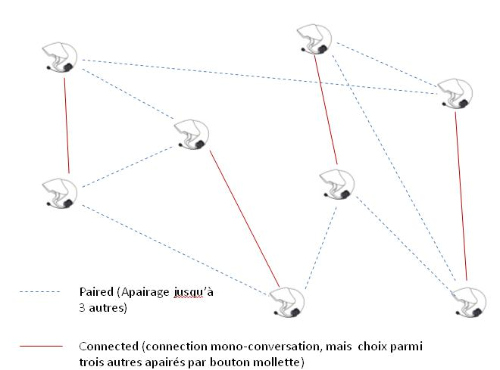 Each Smh10 can be connected to three other modules. A real network on wheels. You just have to press the jog dial as much as necessary to talk to the required connected. The last arrived is the first one in the list. But it will not be possible to all talk at the same time. The bluetooth is a point to point connexion.

The telephone perfectly functions. You have to get a free hands connexion to the Smh10 in addition to the earphone bluetooth.

To answer a phone call, you have to press the rear button, then discuss.

One of our testers said he would have preferred a voice command to dial but it depends on smartphone.

Smh10 is a concentrated of autonomy. We tested the Sena Smh10 during 7 hours ride, plus a whole night on sleeping mode (forgotten to switch off) and another 2h30.

It is only after all this period that the battery said enough.

Charging Sena Smh10 requires 3h and we are ready for another 12 hour cycle. 12 hours is in case of a non interrupted period. The Sena Smh10 is actually the only one to propose such an autonomy.

Proposed at 390€, basic price, the Sena Smh10 is a concentrated of technology and of autonomy. Its audio quality and easiness of use makes the Sena Smh10 will become your best friend for the daily practice of your two wheels.

Withe year end coming, it is time or never to write the Sena Smh10 on your list of gifts. 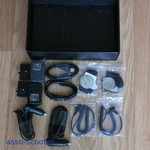